Posted by Janelle on 2012/3/11 3:00:53
Hi, everyone. I've just joined the web group because I've been doing genealogical research and found an intriguing incident in my family history that I'd like to know more about. Apparently my grandfather's grandfather, George Hively, was involved in a murder in 1907. (And by "involved in" I mean he committed the murder -- the facts I have so far point to a love triangle that ended in a shooting at Kettle post office.) I first came across a reference to the murder on a family tree that had been uploaded by someone who I guess is a distant cousin. Then I found a newspaper article from a Virginia newspaper to back up the facts. I'm uploading a jpeg of it. Does anyone know what the local Roane County newspaper would have been at the time? And if it's online somewhere? Also, does anyone know if Kettle post office still exists?
Thanks so much! 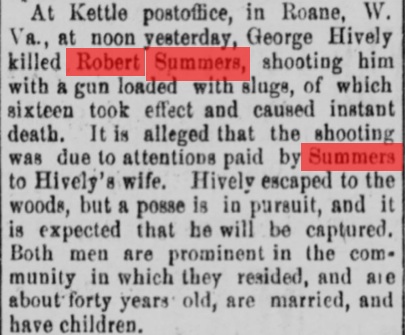 1910 Census Moundsville, Marshall Co., WV, WV Penitentiary.
April 16, 1910.
George W. Hively, age 50, married, Prisoner
Works in prison's whip factory as roller.
(My note: WV Penit. had the largest whip factory in the world in 1879, they had a wagon factory, a bakery, a shirt factory, a broom factory and even owned a farm and a coal mine, the prisoners worked in all of these operations.)

George W. Hively had been released from prison by the 1920 census. They were still in the Harper Dist. of Roane Co. with one son in household. George was listed as an Oil field laborer.

Death certificates are available on the WV Culture & History website for George W. and Sarah E. Hively, plus photos of their tombstones are on Find-a-Grave, Billy Hunt Cemetery in Roane Co., WV.

Posted by Janelle on 2012/3/16 14:17:35
I can't thank you enough! This is very helpful. I was expecting to find a family tree full of farmers and maybe a minister or two, but instead found this. Richard said in his email to me "be careful when you shake the family tree -- you never know what will come out." How true in my case!